HTML Hit Counters
fiona
i love my family and friends
i also love 213'10, 311'11 and nynp
i am a sone
i cannot live without entertainment


Some very long posts to waste your time.
(Compiling of this list to waste my time.)
5th September
Class Chalet '10
Bestseller
Malacca

Thursday, April 30, 2009
3:46 PM
Irritating lor the parental controls! I can't even see my own blog lah, eee.
And now this post page is very-screwed-looking with a lot of little white boxes with (weird) red crosses in them ._.
Today I'm supposed to go for act ._. but stomachache (and now I've to wonder how to get an MC D: oh well) D: Eeyer or not. Damn pain lah D:
I must stop using all the D:s! Use more :Ds.
Yes I ate a chococone tm from Macdonald's just now :D and now my stomach is not-as-pain-ed (O.O)?
OK whatever I am ranting. I know :D.
Hungry :D
Ohmy :D this is taking the smiley:D thing too far:D
Walao :D
OK :D
Facebook :D
BS.com :D
-insert composition line i.e. a wave of nolstagia swept her into yesterday, into the memory that would never return-
Ehehe :D I'm really good at making composition lines right :D
I realise this is a crap post :D so I am pissed :D (yes, contrary to the smiley:D) that I am being so... unfunny! (what! I AM funny lah. Am I not -flip hair :D-? :D) D:
Oh dear I broke the :Dstreak.
Who cares :D
(not me :D)
Facebook.
Monday, April 27, 2009
10:51 AM
Ting Ting's best friend is opposite me in the computer lab. Chao noisy ._.
I miss blogskins.com! Seriously.
I miss Sylvia, I miss Kailin, I miss Yvon and Szeling and and..
Ariel D:
Aw. Fiona is feeling sad.
-sad-
OK lame right ._. doing my photoshop now :D
Yey!
Did you watch Star Awards 2009 yesterday!? Joshua Ang was ____. DYT was wearing a sky blue striped suit lor ._.
-no comment-
Oh well. Bye :D
Saturday, April 25, 2009
3:04 PM
Tada! I'm blogging you know :D

-conversation-
Fiona: Where are you~
Etsuko: Er I'm coming. Where are
you now?
Fiona: Erm.
Etsuko: Ticket Office there ah? Or the place you
tap your ezlink card?
Fiona: Err the place I tap my ezlink card (I am a
blatant liar, yes D:) -start to walkwalkwalk very quickly to erm,
the-place-I-tap-my-ezlink-card-
Etsuko: OK I'm... 300m from there. See you
soon!
Fiona: Huh orh bye -inwardly thinking: OMG 300m only!,
walkwalkwalking-
-end conversation-

Huh turned out I was early and Etsuko surprised me -.- OK lor, took MRTs :D near Harbourfront there (I think at Outram Park :O) Nicole called Etsuko and told her she was at Vivocity de Candy Empire le. Chao early can, even earlier than us ._. So Etsuko told her to meet at pageone :D but erm after me and Etsuko reached we decided to meet at Candy Empire XD (sorry Nicole for making you walkwalkwalk so much D: but it's good for your health lah O.O)
So skip to meeting at Candy Empire :D
Etsuko bought some candy :O then we went to level 2 and decided to eat at Terra Cafe! :D! While Nicole and I ordered stuff Etsuko went to get Rebecca who was hopelessly lost ._. Tsktsk.
OK then eat lor. I'd some nice thingy O.O Linguine Carbonara :D Yes! That. Was tasty :D plus this complimentary mush-cream soup :O (Ohmygawd I cannot believe I subconsciously merged 'mushroom' and 'cream'. So impressed with myself :D) and plus ice-cream! Hee. But was quite (?) expensive OK :/ $15 leh! For myself. The total bill was $55.40 :/ Bah! Ignore! And I was trying to be taitaish and waved the bill thing in the waiter's face O.O
Arcade! Played Table Hockey and a random drumming game (we lost like D:)
OK hmm. Went to Pet Safari I think :D Uber lot of hamsters (really! All types! SYRIAN also wor!) plus some guinea pigs and two rabbits. And DOGS whee. After we looked at the pets enough we went to buy hamster stuff for Momocha (Ying Tong's soon-to-be hamster :O)/Berry (Etsuko's de)/ VIVER:D
Hohoho Rebecca bought a swing for Viver (but erm! Viver don't like leh -_- so I give to Hammie who enjoys hopping around it :D)
Sidenote: 23rd April I'm so bringing Viver and Hammie to school for their first birthday! Must give them presents OK, 113ers! :D!
We saw a beautiful white dog too :O (I think it's a Japanese Spitz as well XD)
After that went to the water play area! Ohmygawd MAJOR ZIPAI SITE :D Took many classics poses ala baywatch and random stuff haha! :D! Was fun and we also splashed water ._. so our bottoms (er sound wrong) got abit wet. Which is when I discovered the disadvantages of wearing a white skort.
-coughs to distract you-
Yep we ran in the water OK! Muaha. And near the water play area are lotsa benches, got someone litter there so I took a picture using Rebecca's handydandy O.O camera :D to UPLOAD TO STOMP. Tsk! So inconsiderate. But at the benches we also took pictures :D crazy poses. I am proud to say I specialize in unglam shots of Rebecca
Went arcade again! This time we won the drumming game XD and played lots of Table Hockey (My ultimate arcade favourite please!) :D plus a bit of ParaParaParadise -.- I sucked at it lor! Don't ask :/ Got random people hog the DanceDanceRevolution (the names all so unoriginal de!) D:
After that went Daiso! Bought some hamster stuff too :D and Rebecca and I ended up buying some project thingy as well :D
*
I quote Etsuko's post:

we were all craving for dimsum

Walao where got! Only you lor!
*
Next went to random Rebecca shops XD Etsuko had to leave then, so Nicole too, then me, then Rebecca -_- (Stopped at Candy Empire for my candy whee! Was chao expensive lah five bucks) Took MRT to Outram Park together :D I decided to eat dinner with Etsuko since we were early. I shall quote her again 'cos I'm too lazy :/

had dinner with fiona! or rather she ate half of my dinner. :p as we were
heading to timezone again, she remembered her sweets were on the table...so she
chiong down and chiong back up with a desperate look on her face telling me her
sweets were gone. we were like, must ocmplain about their overly-efficient
service!

Exactly! Ohmygawd so sad. I confirm the cleaner eat all my sweets lah D:

NEOPRINTS!!!LOVELOVELOVELOVE.even got this wind effect! the first set of
neoprints were lovely but then we wanted more...so take again!can you say
chio?(:another round of table hockey; fiona and i left T.T

Hmm yes. Etsuko did not mention a guy staring at me while she went to top up her arcade card. It's damn freaky ._.
Went home huh discovered my ezlink card no money and wallet also less than five dollars due to unfortunate splurging and cannot take MRT so walk to bus interchange and bus stop both no 961 called my grandmother was reminded of the fact that I could buy a card so I did but went home thirty minutes after curfew kena scolded.
End of this outing.
Sunday, April 12, 2009
9:04 PM
This is gonna be a short post :D just an... update :D 'cos Campus Superstar is ON. As in the Finals. So exciting :D
Yep Friday went to Vivocity with Delafontaine :O was fun, but long, so I shall blog about it tomorrow at school (what are the school computers for lah! Obviously for students to blog ._. right XD)!
Hmm today I went Bugis :O (saw Nicole Chew leh! :D! So shocking. I was playing my erm, QuadraPop game on my phone and then heard someone very loudly shouting my name ._.!) after that went to my aunt's house (with the pomeranian Weiwei and schnauzer Lucky :D)! Eep! Played with dogs, looked at the baby O.O, merely observed my sister's Baby Alive doll -.- and did some homework :D Oh and my other aunt's friend brought his dog (yes yes, boyfriend fine :D). Ohmygawd a JAPANESE SPITZ!
Haha: 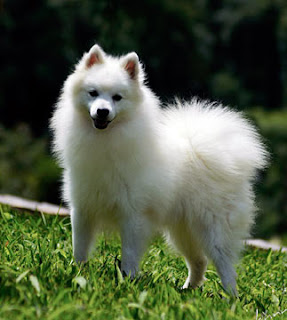 i think 43 liked the present (: not bad. ahahha. nvr waste our effort going
to jp. & gohyingsiu you are seriously 外冷内热，口是心非 lor. still bothered to hand
write + cut out the paper hearts one by one. :D i'm amused. ahahah. but the soft
copy writing of letter was funny too. saw the letter like expand so much !
hahah.

Hmm I'm probably breaking some rule ugh. Never mind.)
!
I tell Jia Chun red blood cells are ugly le lor :O she disagrees. No but they ARE lor can ._. only they are useful and very nice cells, so I liek them.
(Eek I am aware I sound P2-ish -_-)
(Why constant references to P2ness! I am discriminating my erm, P2 juniors :O I must not do that D:)
(OK fine I sound P1-ish :D)
(Fiona you lanbeyhock lah -_-)
(Never mind. Stop talking in BRACKETS parentheses)
Ey. I've got headphones on, and every slightest movements brings me one step closer to pulling my head out D:
Ah yey LMS :O
Bye now :D I've got to ._. hmm?
Yes!
DO HOMEWORK LAH.
So toodley.
Saturday, April 4, 2009
4:45 PM
And then I shall skip to after Dance. You know, what, people's stuff got stolen! Seriously! Like Jia Chun's (handphone + money! Ohmygawd!) lah. I was still happily putting my History worksheets in my file, when suddenly, pandemonium broke out (when lots of people started realising their stuff were missing ._.). Liek zomg lor! OK fine, 4 people were stolen from O: from our class. Damn shocked, and I wasn't paying attention during LA. Please lah, people steal from you in NYGH can! OK fine actually I did listen :D Never mind. Down to lunch after LA. Announcement made about locking doors. I bought noodles, sat with Xuan Li (kena stolen from also), Sabrina, Ting Ting and Etsuko, and suddenly! Got three people walked by discussing the theft. "Handphone, ah, and PSP" ... We thought we're the only class affected, and so we burst out laughing -_- the people were looking strangely at us LOL. Spent the rest of lunch loudly debating the thefts :D the people from the next tables were all O.Oing at us, please! From there we started insulting 113 -_- and loudly debating whether, erm, Sabrina (Lau)'s de was Andy Lau or not -gossipy look-. After lunch, went back. Received announcement to GO HALL just as Rebecca told me the entire secondary three was affected. Zomg please! That thief is freaking scary can, damn efficient leh ._.! OK heh. Talk (basically all I know de :D) then back to class to search bags :/ Eek. Waited outside while some people went to report suspicious characters O: I wanted to also! but dunno who to report. Cannot anyhow report, otherwise later some innocent cleaner auntie become scapegoat ._. Anyway before I majorly digressed, yes. Finally checked all bags :D so went back to class. And then. CHERYL FOUND A CIGARETTE CASE (not moi, Rebecca -_-) So I kaypohly took it from her :D Mdm. Lee made us go to the General Office :D and give to the staff. So we. Did :D Ohmygawd I saw a policeman lah! A few, actually. Damn scary please ._. Haha he's very cute lor like: -sad face- You TOUCHED it already ah? HAHAHA we'd to sadly say, "yesh D:"

It was them after all :O

If the ma'ams are reading this,
which is possible,
I would like to thank
you,
on behalf of 43:
WE LOVE YOU
MA'AMS!
-group hug ala Hannah Montana ._.-
Heh.

You know just now Sushi got lost D: and now she smells dusty leh!
You know I finished my apple juice ._.
Haha yey for jargon.
Sorry for blogging weirdly and un-detailed-ly D: (or maybe my expections of my blog-ness have risen :O like my height) OK. No time what -gives a "what-this-isn't-an-excuse!" expression- O.O
OK bye~
Friday, April 3, 2009
8:45 AM
PE NOW!
Catch you later :D